A girl (2006) Ron Mueck
1. Mueck's sculpture is described as 'hyper-real'. Define the meaning of this term and apply it to his work.
The meaning in “Fine Arts and Visual Arts / Art Terms” is involving or characterized by particularly realistic graphic representation. London based Australian artist Ron Mueck has attempted extreme verisimilitude and exemplifies the hyperrealist concept of an emotional description. He has taken hyperrealism to a new level with his giant sculptures of humanity on show and his amazingly skilled, sensitive and imaginative figures have made him one of the most commended artists of the recent art scene. Many of his works create such a fascinating sense of realism that they leave a permanent imprint on the viewer, by eliciting memories of one's own experiences. His work creates an imaginative opportunity to reflect upon the themes and cycles of life, death, suffering, longing, loneliness and desire. This emotional impact related to viewing Mueck's sculptures is heightened by the fact that the artist usually did not choose to render his figures life-sized. The effect of this altered scale is deep; it changes how we relate to these figures physically and psychologically.
2. Mueck is not interested in making life size sculpture. Find out why he is more interested in working with the scale of the figure which is not life size, and mention 2 works which use scale that is either larger or smaller than life. 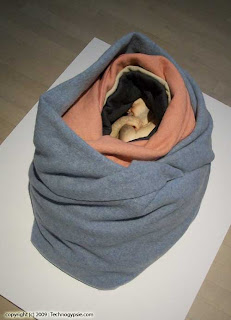 Some works are huge - the baby and the face above are mega-sized and others are smaller than life-size. “A Girl (2006)” and “Face (2002)” are three dimensional images that confront us with humanity exposed. These are personal views of people. This playing with scale affects the mood and emotion of each individual piece - he is in effect using size to control the viewers’ response. The viewer feels almost as though they are intruding on something friendly - something deeply personal.
3. Define Renaissance Humanism, and analyze the term in order to apply it to an example of Mueck's work. Note that the contemporary definition of Humanism is much broader than the Renaissance definition.
Humanism is a very blurred concept. Narrow sense of humanism is a cultural and intellectual movement of the Renaissance that emphasized spiritual concerns as a result of the rediscovery and study of the literature, art, and civilization of ancient Greece and Rome. It has started a 14th century Italy, starting with the European movement propagates by the so-called Renaissance humanism. The broader sense of humanism emphasis human worth and dignity, there are interested in human’s life and the conditions. In Ron Mueck’s Mask II (2001-2), we can find the broader sense of humanism, his work are showing something real and thus to think over the nature of humanity and it can lead to the emotional excitements. He has showed human value and distinction instead of attempting to replicate a Renaissance nativity in a modern manner.

According to one review of the National Gallery of Victoria International (http://www.theenthusiast.com.au/archives/2010/review-ron-mueck/), the beauty of Mueck’s sculpture is that its human universality invites as many interpretations as there are potential viewers. I will note, however, the religious imagery that seems to permeate more recent works ‘Youth’ (2009) and ‘Drift’ (2009).
4. Research and discuss one of Mueck's sculptures that you might find challenging or exciting to experience in an art gallery. Describe the work, upload an image of the work, and explain your personal response to the work. Comment on other student blogs to develop the discussion around the variety of our own personal and individual responses to art and design.
A Swaddled Baby (2002) Ron Mueck 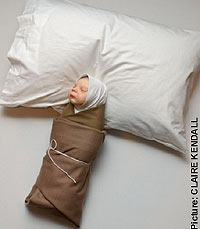 I had the unfortunate experience of viewing his sculptures in my life but I could feel hyper-real through the photograph. My personal favorite is “A Swaddled Baby”; it is wrapped in tightly tied sackcloth, lying on a comfy pillow, its sleeping face blank, it is the only one that is actual life-size in his works. It is the simplest image on display, but I think it is special. As I see this photo I immediately have the feeling of wanting to hug this baby because it is so realistic. However, I cannot understand why the baby is secured with string like a special delivery. I think the string is symbolized to feel pain in the future.
References
AUT University(2011). Academic Literacies in Visual Communication 1, 53 - 60
Artdaily.org
http://www.artdaily.com/index.asp?int_sec=11&int_new=36060&int_modo=1
The Telegraph
http://www.telegraph.co.uk/culture/art/3654109/Body-of-work.html

Teresa Kim
New Zealand
I am tutoring at a mosaic class as a support worker for mental illness.